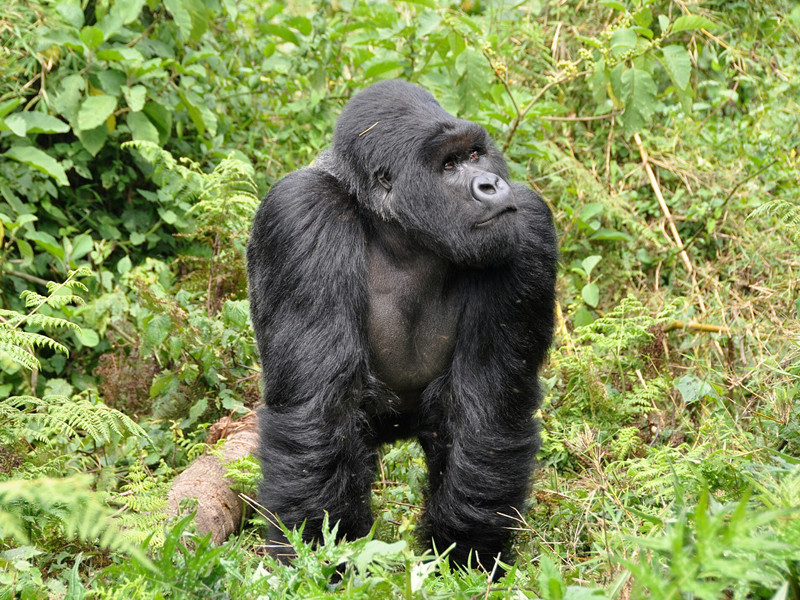 Because this species of gorillas is found around the forests of eastern Congo, southwest Uganda, and northwest Rwanda, the gorillas were exposed to poaching and other dangers. This is because these parts of Africa were undergoing different civil strifes, including civil wars, rebellion, and militancy.

As a result of these issues, the gorillas in these regions were unsafe and suffered from poaching and commercial trading. These dangers to Gorillas were also aided by the uncontrolled influx of firearms and ammunition to these regions during the time of these “wars”.

As a result, Eastern gorillas have suffered a 77% decrease from a population of about 16,900 to 3,800 gorillas over the space of 20 years. What makes these statistics a bit scary is the fact that this decrease in population occurred within a generation of gorillas. This percentage of decrease is almost three times the normal rate that qualifies a species as a critically endangered species.

Some researchers have estimated that if the endangerment of this species of gorilla continues, about 93% of eastern gorillas will be lost by 2054. This is a call for alarm, and therefore relevant bodies and organizations need to rise and prevent the extinction of this critically endangered species of gorillas.

This article seeks to provide adequate information about the nature of Eastern Gorillas. The article will also discuss the actions that have been taken to prevent the extinction of these gorillas.

Eastern gorillas have a robust body, covered with a layer of black fur. Their arms are lengthy, their nose flattened, and their torso, less hairy in the chest area, is broad. Their face, soles, and hands are also hairless. Adult males have a silvery-gray patch on the back, which is the reason for the name “silverback”. The fur of the mountain gorilla subspecies is slightly bluish and shorter than the eastern lowland gorilla.

The face of the Eastern gorilla features small ears, prominent jaws, and brow ridges, as well as huge nostrils. The adult eastern gorilla has strong and muscular arms that are longer than their legs. The difference in the length between the legs and arms of the gorilla is about 15 to 20%. This means that the arms are 15% longer than the legs.

There is sexual dimorphism, as males are larger than females. The male weight ranges between 140-205.5 kg, while the females are around 90-100 kilograms. Females are about 1.5 meters tall, but males reach up to 1.8 or 1.9 meters.

Biologically, the nomenclature and classification of this species of gorillas goes thus;

Gorillas inhabit biomes that have some differences from each other, given the different locations where they live. In the Bwindi forests, they inhabit steep hills at an altitude of 1.100 to 2.400 meters above sea level. The gorillas inhabiting the Virunga Mountains always live in places that exceed 1,500 meters, but can reach up to 4,000 meters. They fancy bamboo forests, subalpine areas, and cloud forests of those areas. Eastern lowland gorillas inhabit the places located between the Lualaba River and the Edward and Tanganyika lakes.

The diet and feeding patterns of Eastern gorillas depend hugely on their habitat. The altitude and the types of plants and fruits available in the habitat are essential factors in this regard.

This species is mainly an herbivore, as their diet is predominantly vegetation. Their distribution range is smaller than other subspecies, and the availability of fruit in that reduced area is not frequent. However, the eastern gorilla diet is also related to the altitude of the forest where they live. Those dwelling in the Bwindi area eat more fruits than those from other locations.

Occasionally they eat bark, flowers, roots, and even small invertebrates.

The eastern gorilla has a social structure based on groups, not attached to a territory, led by a “silverback” male, several females, and their offspring. There are several family groups interconnected, whose members reach between 35 and 50 individuals.

Eastern gorillas are semi-terrestrial. This means that they do not live completely on land. Eastern Gorillas spend some of their time on treetops. Apart from sleeping in the nest made on treetops, they also spend time playing or looking for food on trees.

Eastern Gorillas are diurnal. They spend nearly 40 percent of the day resting and 30 percent in feeding-related tasks. The rest of the time they are usually traveling. They sleep on nests built on trees or steep sites on the floor.

Individuals are mostly peaceful, although dominant males can be aggressive with intruders. Violent fights between “silverbacks” for controlling an area or a female sometimes happen.

Eastern gorillas are polygamous, but only the leader has access to the females of a group for breeding. However, once the male gorilla gets old and starts losing its dominance with the end of his reproductive cycle in sight, female gorillas in his group are likely to leave him for other groups with a dominant silverback.

While some females may remain with the aging silverback out of loyalty, they leave him for other groups once he dies. The death or weakness of a silverback is not the only reason why mature female gorillas leave their groups. They leave for varying reasons, popular among which is the protection of their offspring, especially when a new silverback takes over the group.

There is no specific breeding season, and sexual maturity comes first in females than in males. On average, a female reaches maturity at ten years old and can give birth every 3 or 4 years, which means that they can only deliver 2 to 6 offspring over a life of 40 years. Generally, once a female eastern gorilla matures and is ready to breed, she has two options. The first one is to leave the family group and go join another gorilla group where she can mate with another dominant male or silverback.

The reason for this action is to prevent in-breeding or mating with their fathers. This brings us to the next option available to mature female gorillas. They can decide to stay within the family group. However, they will need to put extra effort into avoiding copulation with their fathers. They often do this by opting to mate with less subordinate males within the group.

The gestation period of eastern gorillas is about 8.5 months. Usually, only one infant is born, and the mother carries him on her back for some time. The young also sleep on their mom’s nests and begin to walk when they are between three and six months old. At 3-3.5 years of age, the mothers stop providing them with breast milk.

The species Gorilla beringei is listed by the IUCN red list as endangered, and its population continues to decline. The mountain gorilla subspecies (Gorilla beringei beringei) are critically endangered in a riskier condition to survive, due to the small number of individuals that exist today. According to the Red List of the International Union for Conservation of Nature (IUCN), there are only about 300 mature mountain gorilla individuals.

There are approximately 300 mature mountain gorillas left in the wild.

Their main threats are poaching, habitat reduction as a result of agriculture and farming, and the armed conflicts in the regions where they live. Many gorillas have been victims of gunshots not aimed at them.

Their trade is internationally prohibited, and many live in protected areas or national parks that ban their hunting. However, it requires a stronger awareness of their importance in the world and the imperative need to keep them alive.

Below is a comprehensive explanation of the threats and dangers that eastern Gorillas are exposed to.

Despite international laws and legislation preventing the killing and trade of eastern gorillas, poaching remains the primary threat to this species of gorillas. The increase in demand for bush meat makes the killing and selling of gorilla meat a lucrative business. There is also the cultural aspect of the problem. Many African societies where these gorillas are found have hunters, whose primary source of income is killing and selling the meat and parts of animals found in the wild.

Another reason why this poaching is still rampant is the destabilizing effect of armed groups and militants in this region. The effect of miners and artisans working in mines around these regions where these gorillas stay is another factor contributing to the endangerment of the eastern gorilla.

Loss or Degradation of Habitat

Eastern gorillas live and thrive in the wild and forests. They feed on leaves, stems, and other parts of plants and fruits. However, the effect of agricultural and pastoral activities around forests in the Democratic Republic of Congo is actively depleting the forest and making it unconducive for Eastern Gorillas to live and thrive.

There are also the mining and mineral extracting activities that are ongoing in the lowlands around the Kahuzi Beiga Park, which is one of the important habitats of the Eastern Gorilla. Commercial logging activities in surrounding rainforests also make it difficult for Eastern Gorillas to feed well, seeing as they rely on plants cut to survive.

As much as one of the ways to prevent the extinction of Eastern Gorillas is regulated tourism, it also poses a problem, as it is the primary source of diseases to Eastern Gorillas. In the past, eastern gorillas have contracted diseases including the human herpes virus, respiratory diseases, and scabies, all of which have proved fatal to gorillas and chimpanzees in captivity.

Climate change is affecting the rainforests and vegetative areas of the world, and the natural habitat of eastern gorillas is not left behind. Increased temperature and irregular rainfall tend to affect the growth of plants and trees, and this can negatively affect the feeding behavior and also the living conditions of these gorillas.

These problems are a few of the numerous reasons why eastern gorillas are going extinct, and there is a need to do more to protect this species of gorillas.