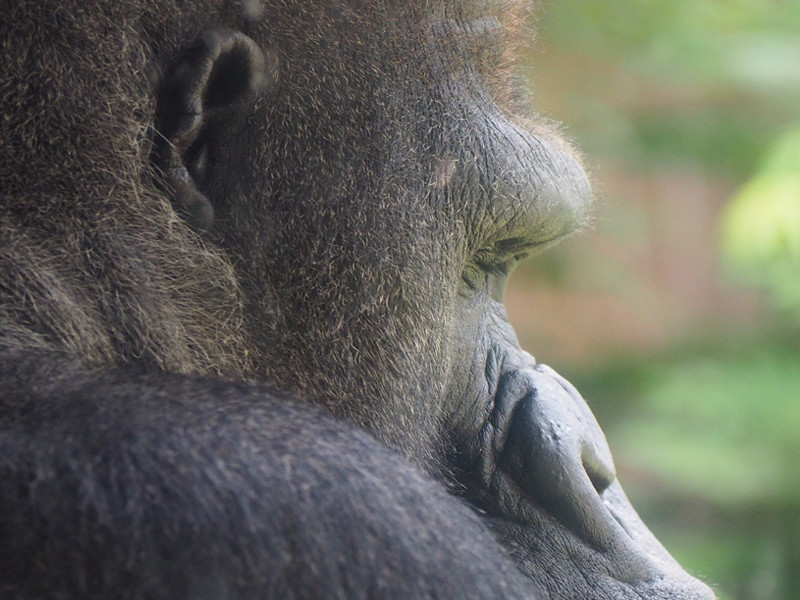 The eastern lowland gorilla is the largest of all gorilla subspecies. It has an intimidating size, making it the biggest of all primates in the world.

Its scientific name is in honor of the Austrian scientist Rudolf Grauer, who first identified this subspecies in the early twentieth century.

The anatomy of the eastern lowland gorilla (Gorilla beringei graueri) is robust and big. There is sexual dimorphism as males are larger and heavier than females; on average, an adult male height is 1.69 meters and weighs 163 kilograms, while adult females are about 1.60 meters in height and weigh little more than 81 kg. The largest eastern lowland gorillas are in zoos, and they can reach more than 250 kilograms.

They have a strong skeleton with a big skull compared to the size of the rest of their body, a short snout, and a jawbone with teeth. Their arms are long and very developed, longer in males than in females. Their thumbs are longer than the rest of the fingers. Like all gorillas, they walk relaying their weight on their knuckles.

The skin of all gorillas is thick, and the eastern lowland gorilla is no exception. They have a deep layer called the dermis and an outer layer, the epidermis, besides a layer of fat that helps them to keep their body temperature stable. Their dark fur coat is shorter than the mountain gorilla, and the hair is absent in the face, hands, feet, and ears.

It has an intimidating size, making it the biggest of all primates in the world.

The distribution range of eastern lowland gorillas is small, it covers only the eastern part of the Democratic Republic of Congo, with populations in the Maiko National Park, Kahuzi-Biega National Park, the Tayna Gorilla Reserve, and Itombwe Mountains region.

This subspecies inhabits mountain tropical forests and lowland tropical forests, although it is capable of living in marshlands and areas with less dense vegetation, as long as they are plants of the genus Cyperus.

It is a subspecies mainly herbivorous that feeds on leaves, fruits, stems, and bark from at least 104 species of plants. Occasionally they add to their diet ants, termites, and some other small insects. They rarely drink water directly from a source, as they get water from the plants they eat.

Like other gorillas, adults can consume up to 18 kilograms of food per day, a significant amount for a human but just enough to allow this animal to maintain its size and health. Thanks to their strength, they can break tough, fibrous plants or tear banana trees to reach the center.

The eastern lowland gorilla social structure is organized in family groups with a dominant male, the “silverback”, several females, and their offspring. Typically, these groups are formed with 2 to 30 members. It is very rare, but in some cases, there are two leaders.

The dominant male has a privileged position and at the same time a great responsibility. He makes the important decisions as to the resting and feeding places; he has access to more food than the others and mates with the sexually mature females. However, he should be alert to threats, and defend his troop from intruders.

Gorillas are not aggressive or territorial. Quite the reverse, they are usually gentle creatures. They spend their day resting, feeding, and socializing, but they spend more of their time in feeding-related activities. They rest on nests built with branches and leaves in trees or on the ground.

They are polygamous; therefore males breed with several females of their group throughout his life. Females reach sexual maturity earlier than males, and they often give birth to one offspring per delivery after a gestation period of about 8.5 months.

While the mother takes care and feeds its young with dedication, the “silverback” males also do their part to protect them both. The infants usually sleep in the same nest as their mothers until they are about three years old, and they gradually become independent. Upon reaching sexual maturity, both genders separate from their birth group and create a new group or adhere to another.

The Eastern lowland gorilla (Gorilla beringei graueri) is endangered (EN), according to the Red List of the International Union for Conservation of Nature. Records indicate that during the last 20 or 30 years, its population has declined dramatically: in the 1990s there were about 17,000 individuals, but this figure has likely been reduced by 50 percent now.

The main dangers of this subspecies are poaching and the trade of its parts, loss, and fragmentation of its habitat, mining (which attracts poachers and promotes social unrest among people in the region), and the armed conflicts that disturb the Democratic Republic of Congo. War is a major problem because it restricts law enforcement and deters the aiming of resources to the conservation of gorillas.

The forest serves two purposes for the Eastern Lowland Gorillas. It is their natural habitat and also their primary source of food. It then becomes a serious problem when deforestation or any other activity that threatens the natural growth and sustenance of the rainforest becomes rampant.

Apart from farms and other agricultural uses, settlements, and roads are built to separate these forest fragments. These demarcations give rise to subpopulations of gorillas, which in turn, increases inbreeding and prevents effective gene flow.

These types of deforestation occur in forests where there is a large human population nearby. However, in places where there are low human densities, the forests are still not safe. These forests are subjected to logging concessions. This means that individuals and businesses can obtain licenses to fell trees in these forests.

By felling these trees, the size of the forest gets reduced and it becomes more difficult for eastern lowland gorillas to feed and live properly.

Recently, there was a survey carried out in the popular bushmeat markets in Cameroon. In this survey, it was discovered that about 600 gorillas’ carcasses were being processed for sale in this market. The sustained increase in demand for bushmeat has made hunting lucrative and it is affecting the survival of eastern lowland gorillas. Combine this increased hunting activity with the slow reproductive state of gorillas, and you will see that it is almost impossible for gorillas to survive the onslaught on them and not go extinct.

This is another major threat facing the eastern lowland gorilla. The areas where these gorillas are highly populated are faced with constant and unending political instability and militancy. Parts of the Virungas where you will find a large population of eastern lowland gorillas have been occupied by militants and armed rebels.

To finance their mission, these militants and rebels have taken up mining operations in the forest, extracting the natural resources found in the region. This activity has increased the population of miners and in the forests, and these miners employ professional hunters to help them source food. It is believed that the eastern lowland gorilla is one of the animals that is affected by these hunting activities.

While most of these refugees do not hunt with guns as professional hunters do, they use snares to eventually injure or kill gorillas. Lastly, due to the presence of rebel militants and refugees in these areas, conservation efforts by local and international bodies have been rendered useless.

Bearing in mind that gorillas share almost the same DNA as humans, diseases that affect humans also affect gorillas. And with the increased interaction of humans and gorillas through the aforementioned means, the transmission of these diseases becomes very easy. However, the problem does affect only gorillas, humans too suffer some consequences.

There are some conservation efforts made by international organizations that focus on creating and expanding protected areas and monitor the existing areas where these primates live to reduce the impact of poaching, habitat loss, and war. Some of these efforts include;

Enacting laws and regulations that would not only prohibit the hunting and capturing of gorillas for illegal trade or pets is one of the best conservation efforts taken in recent times. These legislations did not come from local and national governments alone, international bodies also made laws that help protect these endangered species of gorillas.

Some examples of the national laws and legislation that prohibit the killing and capturing of eastern lowland gorillas include The Nature Conservation Act Ordinance-Law 69.041 of 1969. This law defines national parks.

Another important law that helps the conservation cause is the Law 82.002 of 1982. This law defines game reserves and lists out the species of animals that are prohibited to hunt and capture, of which the Eastern Lowland Gorilla is part.

International laws and legislations that assist the conservation effort on eastern lowland gorillas include the COMIFAC Treaty of 2005, The Kinshasa Declaration on Great Apes of 2005, and the CMS Gorilla Agreement of 2008.

Efforts are being made to ensure that the world pays adequate attention to the parks and game reserves where the eastern lowland gorillas are. One of the progress made on this front is the inclusion of the five parks and reserves holding these gorillas on the list of World Heritage Sites in Danger. This will ensure that the relevant world bodies pay enough attention to the sustenance and maintenance of the parks.