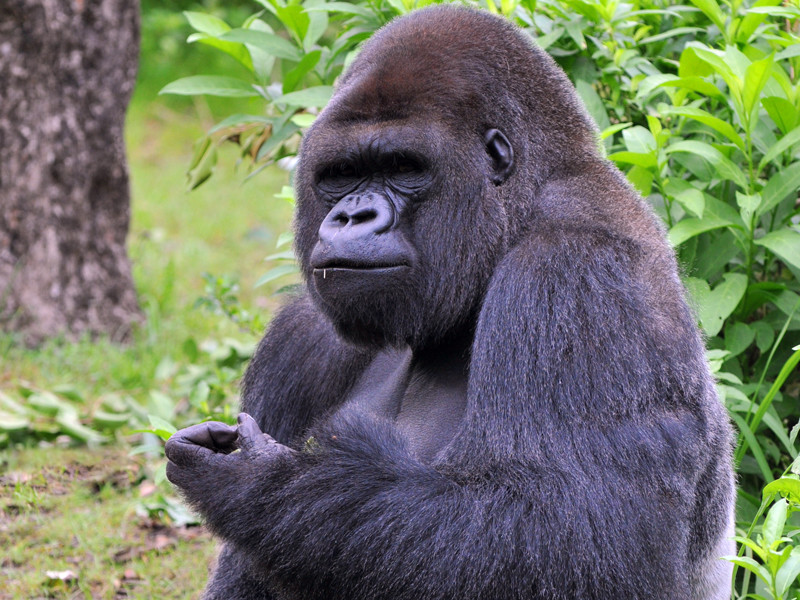 There are several interesting facts that everyone should know about gorillas. While some are just unique information, they are still worth learning!

Gorillas are not monkeys. Many people wrongly think they are, although all are primates, monkeys have tails and great apes such as gorillas do not have any at all. Gorillas are apes, not monkeys!

Moreover, Gorillas are more related to humans than monkeys. Scientists have referred to gorillas as humans’ closest cousins. This makes sense seeing that Gorillas share between 95 and 99% of human DNA. This accounts for the near similarities between a human and a gorilla.

There are other animals (great apes) in this category (sharing a sizable percentage of human DNA). They include bonobos and chimpanzees.

Are they Carnivores? Nope, regardless of their large teeth, they have a fundamentally herbivorous diet, although sometimes they consume small invertebrates. Apart from their herbivorous diet, gorillas help maintain the natural ecosystem in the forest through their feeding habits.

As much as gorillas feed on plants and fruits in the forest, its feeding habit allows for the survival and regrowth of most plants that it feeds upon. Gorillas do feed on all the parts of a plant from a particular plant. What this means is that they eat the stem of a plant, and go on to eat the leaves of another plant. Gorillas would not eat the leaves, roots, stems, and buds of the same plants.

Contrasting the common concept we have of them, they are not aggressive and have a peaceful and timid personality, but they can become very aggressive if they feel someone in the group is jeopardized. Of all the subspecies of gorillas, the Cross River gorillas are the smallest and shyest. This subspecies usually avoids human gatherings and were not caught on camera until 2009.

Despite their shy nature, Gorillas are social animals who exist and live in groups. Depending on the subspecies and population size, a gorilla group can range from 10 to 30 members. They are led by the oldest male in the group whose responsibility includes mating with the mature females and leading the search for food for the group.

Apart from the death of the silverback, mature female gorillas with offspring usually leave their gorilla group when a new silverback is in charge. This is to protect their children, as some silverbacks kill offspring when they take charge of a gorilla group.

Lastly, mountain gorillas do not take much water after food because they live in a cold area and their body does a good job of conserving water.

The Leader of a social group is the silverback male, named after the silver patch of hair on his back that appears when they are mature. “Silverbacks” typically have more than 12 years, and are usually the oldest gorilla in the group.

However, when they are in captivity, they get fed commercially made food which harms the life and life expectancy of the gorilla.

Gorillas walk on their knuckles which is the reason why they are referred to as quadrupedal animals. Typically they move on their arms and legs, although they can stand up and walk on two legs short distances up to 3 meters.

Blackbacks is the name given to the young males of a group that still do not have the silvery hair patch on their backs.

The gestation period of gorillas is 8.5 months, very similar to the human gestation of 9 months. In a similar fashion to humans, gorillas can mate or copulate while facing each other.

The process of childbirth and child care is also almost similar to that of humans. Female gorillas care for their offspring from the first few months up to the third year of birth. The mother searches for food for the infant gorilla and protects it from attacks.

An adult male gorilla consumes approximately 18 to 20 kilos of food every day, which represents 10 percent of its weight.

The oldest gorilla on record is a female named Colo, who lives in the Columbus Zoo and Aquarium. She was born in 1956, so now is reaching 65 years old.

Gorillas build nests on trees to sleep at night, but unlike other primates, they can also develop them on the ground and lie there. Each gorilla has its own nest, although as expected, the young sleep with their mothers.

All Gorilla subspecies are endangered, but the Cross River gorilla is the most threatened. According to the IUCN red list of endangered species, there are less than 200 individuals.

The word “gorilla” comes from a Greek word meaning “tribe of hairy women.”

Gorillas are diurnal; this means that they perform most of their activities during the day such as feeding and socializing.

The major threats that gorillas face are the loss, reduction, and fragmentation of their habitat, poaching, infectious diseases, and armed conflicts in the places they live.