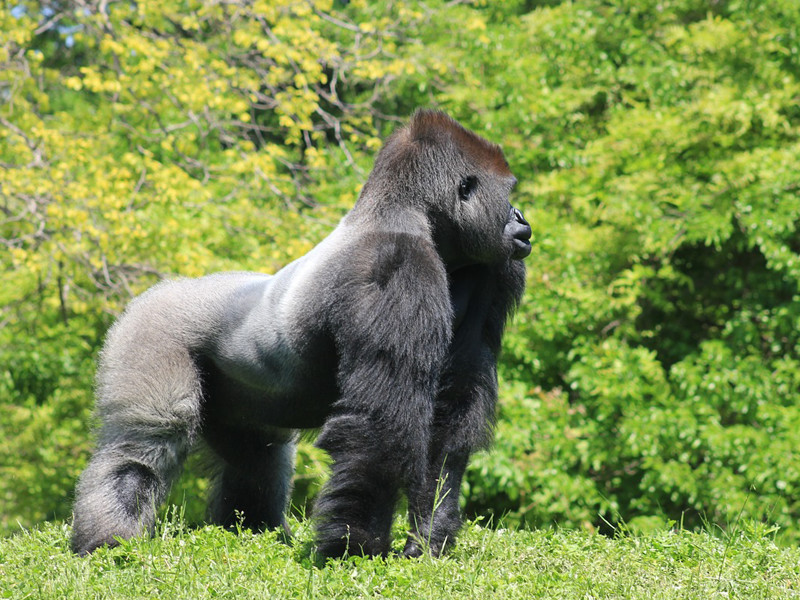 Gorillas are the largest primates in the world, and they have parts of their body that are very similar to those of humans. In addition to their size, they are endowed with many striking and exciting features.

The most evident characteristic is their large and powerful body, unlikely to be ignored. The height and weight vary depending on the species, but in every case, males are larger than females, and “silverback” males have the larger size among all the individuals in their group.

Adult females weigh around 68-113 kilograms and males, 135-180 kg, an average of all subspecies. Moreover, the length between the tip of one arm and the other is between 2.3 and 2.6 meters. This size is much larger than its height!

Their body shape is robust. The belly area is bigger than the chest, and an elongated head up is due to a prominent sagittal crest. Above their eyes, there is a noticeable brow ridge, and they have small ears on both sides of their head. Around the nose, there are a few wrinkles unique to each gorilla, a fact used by scientists to quickly identify them in the wild.

Their arms are longer than their legs. When walking, they do it on their knuckles, resting their weight on the arms. Thumbs and toes are opposable therefore they can easily manipulate objects. Like humans, they have unique fingerprints and nails instead of claws.

Both skin and fur have dark colors, sometimes black, brown, or dark gray. The pelage of lowland gorillas is shorter than the other species, but all subspecies lack hair around the nose, lips, chest, ears, feet fingers, and palms of hands. As mountain gorillas inhabit the coldest areas, they have thicker and longer fur than the other subspecies.

Male gorillas grow in their backs silvery hair patterns, which works as an optical illusion because makes them look longer than they are. Additionally, all gorillas have no tails.

Their skeleton is adapted to hold the weight of their body. Their spine is straighter compared with that of humans, and the muscles of their arms, shoulders, neck, and back allow them to have strength up to 6 times higher.

The sagittal crest is large enough to hold the strong jaw muscles used by gorillas when chewing tough, fibrous vegetation. The skull is large compared to the size of their body, and they have a big and highly developed brain. The large belly is the result of a long digestive tract, essential to digest the fibrous food they consume.

Like humans, they have 32 teeth in their jaws. A single bone forms the lower jaw, which has specialized teeth for cutting, grinding, milling, and so on. In the case of adult males, protruding sharp canines of considerable length are developed.

Adult males have underarm glands that expel off a pungent odor when they feel stress or excitement.

As much as we have stated that the Gorilla and humans share almost the same DNA, and this fact is corroborated by the intense similarities between the anatomy and skeletal system of humans and gorillas, there is a slight difference in the anatomy of humans and Gorillas.

This difference is the bone density. Gorillas have thicker and dense bones than humans. This feature accounts for the average weight of a gorilla which sits at about 300 to 450 pounds, a weight range that beats that of the average human being.

This huge bone density comes with advantages and disadvantages for the gorillas. The dense bones make them huge, stronger, and less susceptible to fractures and bone damage. This is more common with humans because our bones are not as dense as the gorillas.

The disadvantage that comes with have a dense bone is that it makes gorillas less buoyant and flexible, meaning that they cannot swim. The less-dense bones of humans make it easy for us to find buoyancy and balance in the water and swim. Gorillas do not have this advantage because of their dense bones.

This is another fact that is born out of comparison to gorilla’s closest cousins, humans. With humans, our arm’s length or span is usually used to determine our height. This means that in most cases, the total length of your arm span is your actual height. However, it is not the same for gorillas.

Gorillas are quadrupedal, meaning that they move around on four limbs. However, when they stand on two limbs like humans do (bipedal) and the average gorilla is about 6 feet tall. One would expect that their arm span also measures about 6 feet, but upon close observation, it was discovered that a gorilla’s arm span is about 8 feet.

This means that the arm of a gorilla is longer than its height. This anatomic feature comes with certain benefits for the gorillas. For instance, the longer arm length ratio to height makes it easier for gorillas to climb trees. It makes them better climbers than humans.

Also, the arm length to height ratio makes the quadrupedal movement easier for gorillas, as their skeletal system is more adapted to it than that of humans.

The Hand and Feet Configuration

You will find the gorilla’s big toe bigger and placed more lowly on the foot than as it is with humans. Again, this part of gorilla anatomy comes with certain advantages and disadvantages. The major advantage of this limb configuration is the fact that it helps gorillas grasp tree branches and move swiftly from one tree to another.

Because the climbing and grasping behavior is very important and integral to the gorilla’s life, the hand and feet configuration is an important part of the gorilla anatomy.

The disadvantage, however, is that they cannot walk easily on two limbs because their feet cannot provide the needed force or push that a bipedal movement requires, hence they rely on the four limbs and also their knuckles to move easily.

Humans have a bipedal movement and that is due to their forward-looking toes which helps provide enough push and force required for the movement.

Both humans and gorillas have a brow ridge. The only difference is that the brow ridge in humans is subtle, curved, and not very noticeable, unlike that of the gorilla which is heavily pronounced. It is straight and continuous, sticking out over the eyes of the gorillas.

This, in turn, reduces the strain on the gorilla’s skull when cracking or chewing hard nuts. It was claimed that with the support provided by the brow ridge and sagittal crest, gorillas are capable of cracking a coconut with their teeth.

Finally, it should be understood that the brow ridge is an actual part of the gorilla’s skeletal system and its original name is “Supraorbital Ridge” which translates as “the ridge above the eyes.”

If you compare the facial features of a gorilla and that of a human, you will find that gorillas have no chin. Yes. There are no protrusions from the area underneath the gorilla’s mouth. Rather, the area looks sunken as if the protrusion is drawn back within.

As surprising as this may sound, many mammals do not have chins. Humans are the only animals known to have protrusions known as the chin. The reason for this is still baffling researchers as they are working tirelessly to find the answer.

These are a few interesting facts about gorilla anatomy. One would see that as much as there are lots of similarities between humans and gorillas, there are lots of differences, especially with the skeletal system and anatomy.