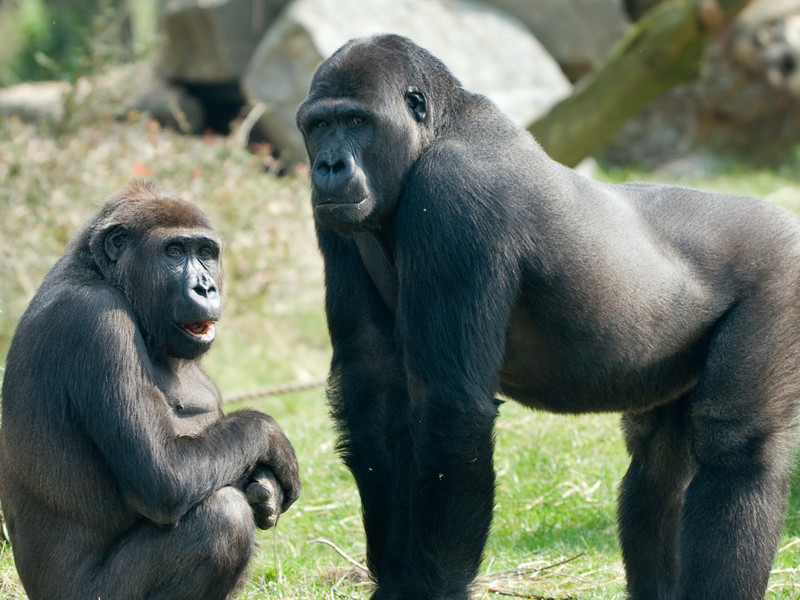 Gorillas have many ways in which they communicate, both verbally and non verbally. It can be very loud around gorillas when they are active and communicating but there is plenty of information about what their sounds mean. They often mix sounds with actions and that makes it more clear to researchers what is being said.

Adult males won’t back down when they are being challenged by younger and immature gorillas. They will make very loud screaming sounds and at the same time they will beat their chest with their hands rapidly. This is a warning signal to the younger gorillas to back off or they will be engaged in a battle. Most of the time the younger ones will retreat.

Researchers have identified 20-25 different sounds that gorillas made and what they mean. There are still many more though that we don’t fully understand yet. They make screams, grunts, roars, growls, and even hooting like an owl at times. They certainly can be funny too, laughing in a way that seems like they are making fun of others around them and even the famous sticking their tongue out.

What is also very interesting is that in certain troops they may develop forms of slang as we do in our own social groups. This is fascinating as it means that their communications are often learned behaviors and not just instinct driven. It can be harder though for gorillas when they move to find their own troop though as those forms of communication wont’ be readily known by others outside of that troop.

Gorillas have also been taught how to communicate on various levels by humans. One very successful story is that of KoKo, a female gorilla. Scientists taught to her how to use sign language which was considered to be quite a breakthrough with these animals.

They have very good hearing so they can call out to each other. The young definitely learn the voice of their mother at a very young age. They can pick up low noises that humans can’t hear easily and that is often how they are alerted to dangers. They also rely upon their sense of smell to warn them if humans or other threats are in the area.

Young gorillas have communications that they use which are similar to those of human babies. They include whining and making sharp noises. Their mothers are quick to try to find out what they need to get those forms of communication replaced with those that are more along the lines of contentment.

There are 9 complete steps to what has become termed as the gorilla communication ritual. First they will offer hooting sounds that get faster, feed in a methodical way, jump up and down, throw food, beat their chest with both hands, kick with their legs, run sideways, tear at vegetation out there, and end with their palms hitting the ground and more hooting sounds.

Many researchers continue to try to decode the language that is believed to be there for gorillas. This isn’t an easy task though with so many sounds being produced by them. It is like trying to take a completely foreign language and learning it all on your own. Since many of the different sounds seem to have multiple meanings then that makes the task even more difficult.