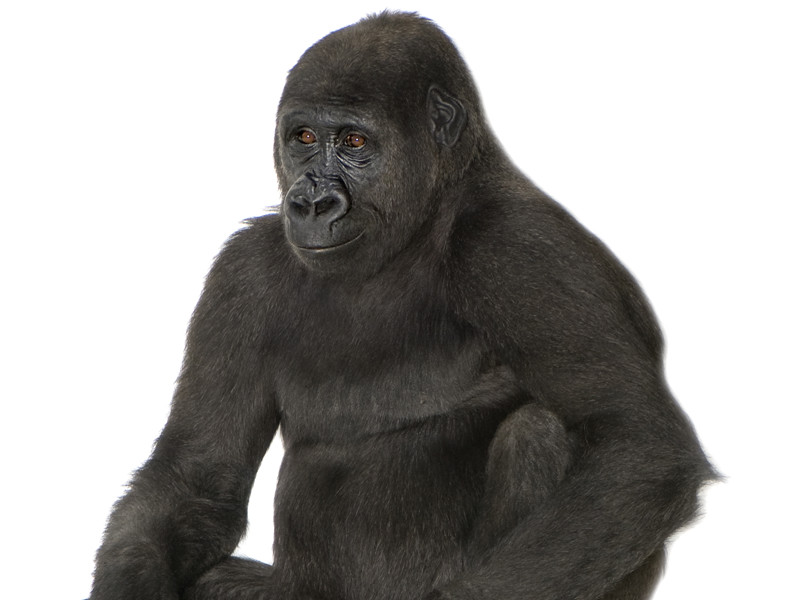 The history of the primates has at least 65 million years. Today there are more than 500 species distributed around the world in America, Asia, and Africa, but it took several million years for the early ancestors to evolve into modern gorillas.

There are more than 500 species of primates around the world today.

All members of the Primate order descend from animals that lived or spent much of their time in the trees of tropical forests. It is likely they originated in Africa, from proto-primates who lived at the end of the Cretaceous period. Purgatorius is the name of a genus of animals that some scientists thought were the earliest proto-primates, but there is a debate on this theory, and recent findings have proved they could belong to another genus. Their appearance was not similar to modern monkeys or apes because they looked more like rats.

Prosimians, today represented by lemurs, bush babies, lorises and others, were the next to appear and the first primates to evolve. About 40 million years ago, the first Old World monkeys appeared, and later the New World monkeys settled in America. The genre Branisella is the predecessor of the new world monkeys; one of their characteristics was that the members of this genre had a long, prehensile tail.

The apes of Hominoidea superfamily appeared about 25 million years ago.

The Gibbon, sometimes wrongly considered a monkey but is an ape, was the first primate to secede from apes about 18 million years ago. At this point, gibbons and the great apes were already different animals than monkeys, without the long tails that monkeys have. Scientists think that the superfamily Hominoidea appeared about 25 million years ago somewhere between the Oligocene and Miocene.

After the divergence of Gibbons, members of the genus Pongo, orangutans, also separated from the others about 14 million years ago. During the late Miocene, about 11 million years ago, apes that were the ancestors of the modern hominids were abundant in Africa. Some reached incredible height, such as the Gigantopithecus, a genus of great apes that reached up to 3 meters high.

The closest relatives of Gorillas are chimpanzees.

Possibly the Gigantopithecus were ancestors of modern gorillas, but also other apes could be. Humans, chimpanzees, and gorillas shared a common ancestor in a lineage where orangutans were not there anymore. Gorillas are closely related to Homo sapiens, but less than chimpanzees. However, the closest relatives of the Gorillas are chimpanzees.

The gorillas were separated from the other hominids about 7 million years ago, although some sources indicate that began to populate Africa around 11 million years ago. With the extinction of other great apes, gorillas became the largest primates in the world.

A few years ago, it was thought that all gorillas belonged to a single species, and there were three subspecies, but now, the latest research concluded that there are two species: eastern gorilla (Gorilla beringei) and western gorilla (Gorilla gorilla), with two subspecies each. Both species diverged about 2 million years ago and were separated by the Congo River.

Subspecies split for various reasons, in the case of mountain gorillas (Gorilla beringei beringei), separated from the eastern lowland gorilla (Gorilla beringei grauer) about 400,000 years ago. Meanwhile, according to the hypothesis of experts John F. Oates and Esteban E. Sarmiento, the Cross River gorilla (Cross River gorilla) was “converted” into a new subspecies during the Pleistocene, as a result of adaptation to the scarcity of food.