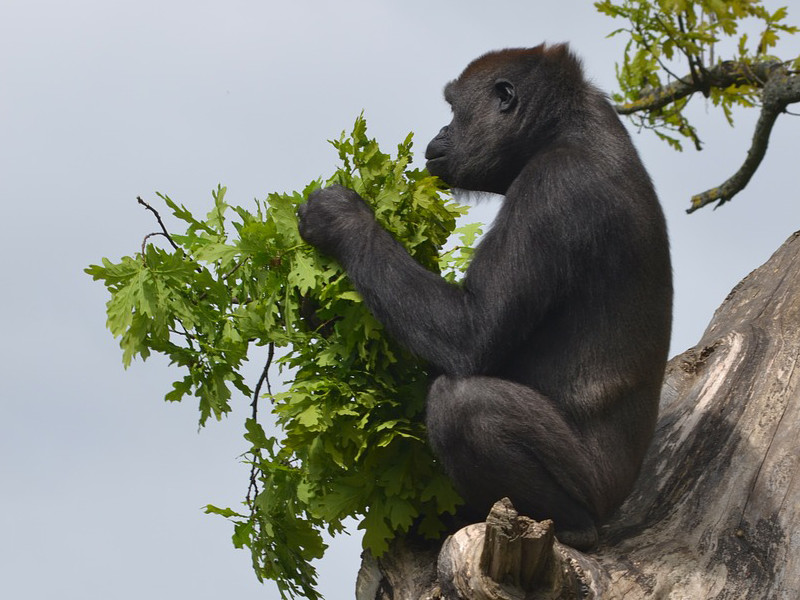 One of the biggest animals you will ever find is the Gorilla. It is instinctive to attribute their feeding habit to their size. In this article, we will discuss the diet of Gorillas and how their feeding pattern helps them build a strong and muscular body.

Another reason why this question continues to bother most people is many Gorillas do not survive in captivity (Zoo). They seem to prefer their diet in the wild, rather than what they are offered in the zoo.

For starters, it is important to note that Gorillas are herbivores. They feed on leaves, vegetative materials, and nothing else. They do not eat flesh nor do they mix their diet. You will get a comprehensive guide on Gorilla feeding in the article.

What do Gorillas Eat?

As stated in the introduction, Gorillas are herbivores, and thus, they mainly consume a vegetarian diet. These include young branches, leaves, fruits and seeds, buds, roots, stems, and barks. You may also find Gorillas eating pith of wood.

Mountain Gorillas are also not particular about water intake. There are two reasons for this. The first reason is that there are herbivores, which means they feed on fresh plants and leaves. These leaves provide enough water intake.

The second reason is that Mountain Gorillas live in high-altitude areas. This means the surrounding temperature is low, and they don’t lose large amounts of water to the temperature. This also reduces the need for water most of the time.

It is impossible to generalize the diet of all gorillas. There are two species with two subspecies each, and they all inhabit different areas. The eastern gorilla is far from its western relative, and since they live in specific regions at different altitudes, with particular vegetation in each place, the components of their diet often differ from species to species, between subspecies, and even according to the season of the year.

An adult gorilla can consume 18 to 20 kilograms of food daily.

Gorillas eat small leaves, stems, fruits, bark, and buds, and occasionally small invertebrates like ants, worms, termites, and larvae. The Western Lowland Gorilla subspecies (Gorilla gorilla gorilla) eat the fruits of more than 100 species of trees, 97 of which produce fruits seasonally. About 67 percent of their diet are fruits, 17 percent are leaves, and the rest are seeds, stems, caterpillars, ants, and termites. Sometimes, they enjoy aquatic plants. The other three gorilla subspecies consume much fewer fruit.

The Cross River gorilla subspecies (Gorilla gorilla diehli) are known to consume fruits, leaves, stems, and occasionally invertebrates. The Afi Mountain subpopulation consumes many herbs of the genus Aframomum, but in the rainy season when available, they prefer the species Amorphophallus difformis.

The mountain gorilla (Gorilla beringei beringei) lives in areas of high altitude above sea level, so their habitat lacks fruit trees. Therefore, they consume leaves, stems, and buds of 142 species of plants, representing up to 86 percent of all their diet. Only 2% are fruits, 3% flowers, and 7% roots and invertebrates.

The eastern lowland gorilla subspecies (Gorilla beringei graueri) feed on at least 104 species of plants. Their diet varies seasonally, and it is very diverse. In times of abundance, fruits can reach up to 25 percent of their total consumption.

Males eat more than females. An adult male can consume 18 to 20 kilograms of food daily, while females consume two-thirds of that amount. The amount of food consumed varies among individuals.

In areas near human communities, crops attract gorillas, which they can eat. They hardly drink water directly from the source because they get the liquid from the vegetation they eat.

What this means is that gorillas feed mainly on the plants available in their local habitat. The type of plants and leaves that a Gorilla in a rainforest will be different from that in a dry forest or on a mountain top.

Generally, the following are some of the plants and fruits Gorillas eat;

Due to the relatively low energy value of a diet based on leaves, stems, and herbs, most gorillas spend significant time in feeding-related activities to achieve the appropriate nutrition needed.

The eastern lowland gorilla covers long distances to find fruit; in fact, they are the subspecies that move longer distances: on average, up to 1,105 meters per day.

Once they find a food source, they select specific parts of the plant, either the leaves, stems, or roots, and tear them, or take the whole plant directly into their mouth to tear off its parts. They have no problems with plants on firm soil. Their strength allows them to pull out any plant from the ground.

A Gorilla stands up from its sleeping nest as early as possible in the morning to search for food and prepare a pleasant spot where it can eat and rest. Usually, the silverback in a gorilla group is responsible for searching and selecting a suitable spot for eating and resting.

Another interesting fact to note is that, despite being herbivores, gorillas do not harm plants and vegetation through their feeding habit or process. Gorillas are very conservative in their feeding pattern, as their approach to harvesting roots, stems, buds, shoots, and leaves does not deplete plants or makes it difficult for them to grow.

An example of this is that a Gorilla would not eat the roots of a plant from which it ate leaves or buds. It would rather go to another plant (usually of the same species) and pick the roots. This feeding pattern ensures Gorillas have enough to eat in the wild.

Another impressive aspect of the Gorilla feeding culture is the fact that every gorilla group has a feeding zone. Regardless of the number of gorillas in a group, all of them would restrict themselves to their feeding zone. Trespassing into another feeding zone is rare and usually leads to a fight where the silverback must protect his group.

Also, their main source of food is vegetation, including leaves, buds, roots, stems, and the likes, which are low in energy content. Therefore, they need to eat a sizable amount of food to get the required amount of energy.

Therefore, the total amount of food consumed by a silverback is pegged at 34 kg, while the female gorilla eats about 20 kg per day.

Infant gorillas also have feeding habits and quantities. Usually, a baby gorilla relies on its mother for food for the first three years. This means they need not worry about food. The mother shares her food with her baby.

As early as 6 months, the baby gorilla is introduced to eating plants and vegetation. By 8 months, they start eating solid foods like roots, stems, and branches. They also start eating fruits around this time.

Gorilla Diet in the Zoo?

As against their counterparts in the wild, Gorillas in the Zoo do not feed exclusively on plants and fruits. They also do not have to fend for their food, as their attendants ensure that food gets to them regularly.

In the zoo, Gorillas feed on commercially produced foods and biscuits known as Monkey Chow. This food contains many calories as it has high carbohydrate contents and is also grain-based. The reason for adding these commercially produced biscuits is to ensure that Gorillas get all the nutrients they need and require from their food. However, this appears to not be the case with some gorillas.

To test if a switch to the wild Gorillas diet would improve the health of gorillas, a researcher in the North Carolina Zoo embarked on research where he substituted the commercially produced food with leaves, plants, and fruits that are easily obtainable in the forest. At first, it was a bit difficult for the Gorillas, as they didn’t touch the new food for a while.

After trying to mix the food and persuade the Gorillas, they started taking leaves and plants, including leafy greens, like Romaine Lettuce, Alfalfa hay, some fruits, and multivitamins. Others included spinach and kale. After taking this new diet for a while, the researcher decided to test the effect of the new diet on the Gorillas’ health.

Because it would take years to correctly determine the effect of the diet on their health, the researcher opted for blood tests and behavioral patterns. The blood tests revealed that the risks of inflammation and obesity were greatly reduced after the Gorillas started taking this new diet. Also, on the behavioral level, they discovered that Gorillas were twice as active as they were when they feed on commercially made food.

This research further confirms that as much as the gorilla’s feeding habit in the wild is unregulated and unmonitored, it provides the gorilla with needed nutrients to live a healthy life.

Gorilla males are ready to mate when they are approximately 13 years of age. For females it is about 10 years of age. Gorilla mating happens all year round.