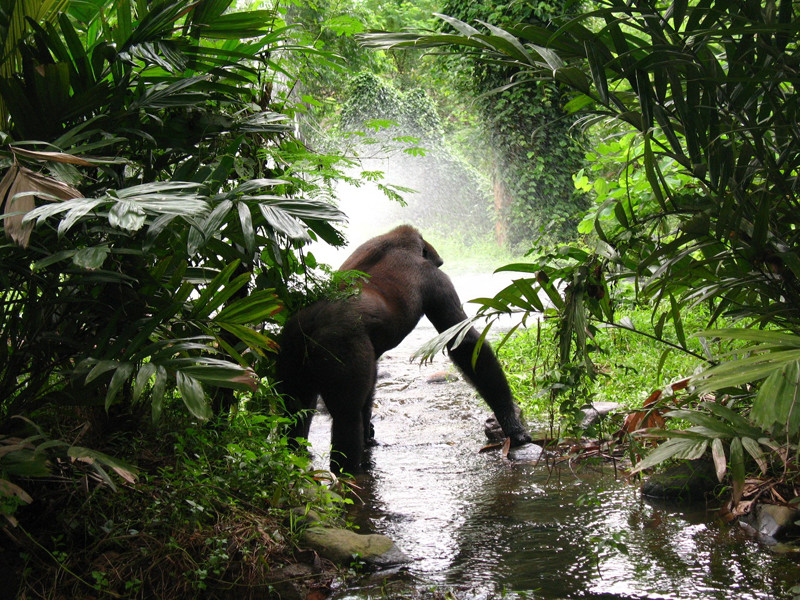 Everyone who has seen gorillas on television or movies perhaps knows that gorillas are from Africa and live in the jungle. However, there is further information about the habitat and distribution of these hominid primates.

To first point to consider is that gorillas live in Central Africa, near the equator. One species, the western gorilla, lives in a region toward the west of the continent, while the other species, the eastern gorilla, evidently lives in the east. The areas where they live have the necessary resources to meet their needs; this is the result of a long process of adaptation that allows them to survive under that specific conditions and not in other places where the weather is colder than the places where they live, or the precipitations are not enough.

Gorillas thrive in the tropical and subtropical forests that run along the equatorial belt.

Given the extent of its geographic range, and due the fact that the species are in separate regions, they have diverse habitats, located at different altitudes. A habitat is an area with the appropriate conditions for the development of an organism, which adapts to the temperature, humidity, food availability and several other factors in the place. As an example, you will never see a gorilla in the savanna although these are also in Africa.

A habitat provides food, shelter and a place to socialize. In the case of gorilla species, separated by the Congo River, it is known that they thrive in the tropical and subtropical forests that run along the equatorial belt, almost by the middle of the African continent. In the Congo River Basin, there are extensive regions of green, lush and full of life jungles that harbor many water bodies, often tributaries of the river, which together allow the survival of the gorillas. However, they rarely drink water directly from a river or lake, as they obtain it from their vegetable foods.

Abundant and green vegetation is the main characteristic of the gorilla habitat.

Tropical forests where gorillas live have a temperature of around 23-celsius degrees and rainfalls fluctuate throughout the year. In the lowlands, a dry season is experienced every year, therefore, many plants that store more water than conventional plants grow in the area. They are called succulent plants.

In addition to tropical forests, gorillas can live in other types of habitat: dense old-growth forests, areas along the edges of forests with high concentrations of low vegetation, mountain and sub-mountain forests, swamp forests and savannah forests. However, each subspecies is found in particular habitats.

Specific habitats for each subspecies

Western Lowland Gorilla (Gorilla gorilla gorilla).
They inhabit west of the Congo River, mainly in lowlands with marshy, coastal and secondary tropical forests, at altitudes of up to 1,600 meters. Every year they have a rainy and a dry season.

Cross River Gorilla (Gorilla gorilla diehli).
They live in sub-mountain forests at altitudes from 150 to 1,600 meters above the sea level. They also inhabit swampy forests, sometimes reaching an altitude up to 2,000 meters.

Eastern Lowland Gorilla (Gorilla beringei graueri).
They spend their life in lowland old-growth forests, mountain forests, bamboo and even swampy forests, at altitudes ranging from 2,900 to 3,300 meters above the sea level.

Mountain Gorilla (Gorilla beringei beringei).
The members of this subspecies inhabit mist-covered mountain forests and have a well-known habitat. There are two mountain gorilla populations: one located in the cloud forests and sub-alpine regions of the Virunga volcanoes, at altitudes from 2,200 up to 4,300 meters above the sea level; and another, settled in the dense jungle of the Bwindi National Park.

Bill Weber, Amy Vedder. In the Kingdom of Gorillas: The Quest to Save Rwanda’s Mountain Gorillas. Simon and Schuster, 2012.