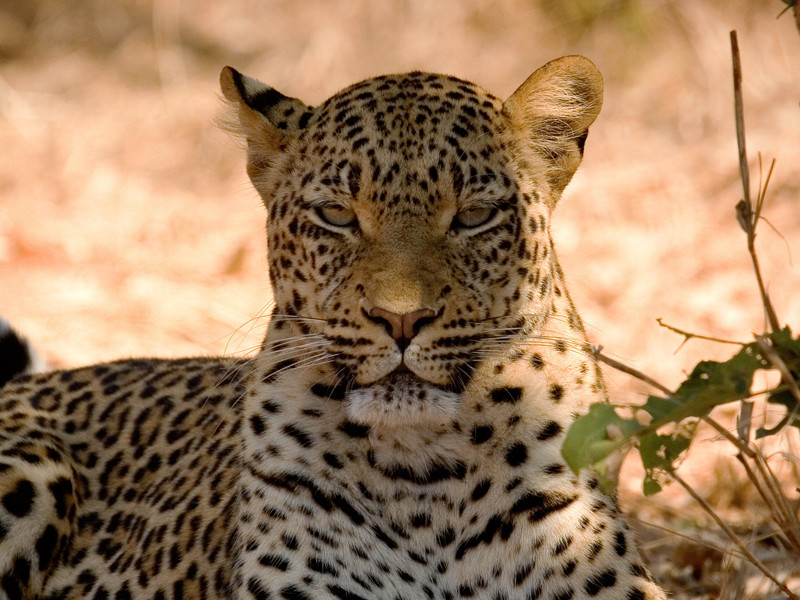 Gorillas are herbivores, but does that mean that they are also preys to some animals? The answer is “Yes”. Gorillas indeed are one of the biggest and strongest primates and animals in the wild. But they are still prey to some animals, regardless.

It is easy to guess that gorillas do not have natural predators when you see the size and power of a male gorilla. Its physical characteristics and social structure help prevent it from being prey to other animals, but this does not mean they are riskless.

The Congo Basin is a region full of life, where several animal and plant species inhabit. Like mountain and swamp forests, the other places where gorillas dwell are not far behind regarding biodiversity. Gorillas share their habitat with animals such as the African forest buffalo (Syncerus caffer nanus), African gray parrots (Psittacus erithacus), African forest elephants (Loxodonta cyclotis), Giant Forest Hog (Hylochoerus meinertzhageni) and leopards (Panthera pardus).

Leopards can kill an adult gorilla.

Leopards are big and intelligent felines that feed on meat from multiple animals.

In their habitat, they can find unsuspecting gorillas susceptible to becoming their food. Leopards are the only animals in their range that have the ability to kill an adult gorilla. It is not an easy task since the largest primates in the world are unyielding and organized. Therefore, at the first sign of threat, they emit alarm calls to warn the group. The main advantage of felines is their ability to climb trees quickly and efficiently, which are the places where these primates build their nests.

Leopards rarely prey on adult male gorillas, but they do it specifically of western lowland gorillas (Gorilla gorilla gorilla). Usually, they avoid “silverback” leaders that are stronger and focus on young individuals or offspring. Since gorillas live in tropical climates, their remains quickly disappear, consumed by scavengers and insects. On one occasion, Carnivores entirely devoured the remains of a western lowland gorilla killed by a leopard in Gabon after 3 or 4 days.

Other potential predators are crocodiles, although incidents with these reptiles are unlikely.

Other possible predators are crocodiles lurking motionless in the water and can attack them when they come to drink or when they walk in the middle of swamp forests. However, incidents with these reptiles are unlikely since Gorillas rarely drink water directly from rivers or swamps. Sometimes, gorillas do not die during the attack, but soon after, they cannot recover because of the wounds that become infected.

However, there is no more significant danger for gorillas than humans. Not even the attacks of leopards have such adverse effects on gorilla populations as human activities. The reasons why people hunt gorillas are diverse, but usually to trade them. Humans capture gorillas alive to sell them or kill them to sell the meat or parts; this is additional to the damage caused to entire populations by destroying or degrading the habitat in which they live.

Apart from these two animals, another serious predator that the gorilla faces is the human being. Humans are the most severe gorilla predators at the moment. Reports have shown that the biggest threat to the life of a gorilla comes from a human being.

The following are ways through which humans harm gorillas;

Coltan is a crucial mineral resource used in the telecommunication industry. It is a metallic ore that combines tantalum and niobium. This metallic ore, after refinement, turns into a powder with heat resistance and unique electrical charge storage capabilities. This makes coltan essential components of the capacitor placed on circuit boards of mobile phones.

Now, the African continent has a large deposit of tantalum, with about 80% of these deposits located in the East African country of Congo. Some species of gorillas are also in abundance in the same region. The problem that ensues is that gorillas live in the majority of the forests where tantalum is mined.

This has caused a problem for the survival of gorillas, as land clearing is an essential aspect of the mining activities, and it includes cutting down trees and plants that serve as food for gorillas.

Moreover, while mining tantalum in the forests, miners have a limited food source, especially protein. In these situations, they rely on bushmeat, and gorillas are the first options for bushmeat, given that there is a large gorilla population.

Because coltan is used for making cell phones, the need for tantalum has increased, and this has, in turn, resulted in the increased exploitation of forests in Congo DRC, putting pressure on the gorillas.

Unfortunately, there are very few alternative sources of tantalum or coltan.

Another way through which humans act like gorilla predators is by hunting gorillas for bushmeat.

These gorillas inhabit forests and regions near societies that uphold traditional African cultures. One of the jobs rampant in these societies is hunting, and eastern lowland gorillas are some of the animals at the receiving end of these activities.

Recently, there was a survey carried out in the popular bushmeat markets in Cameroon. This survey discovered that about 600 gorillas’ carcasses were being processed for sale in this market. The sustained increase in demand for bushmeat has made hunting lucrative, and it is affecting the survival of eastern lowland gorillas. Combine this increased hunting activity with the slow reproductive state of gorillas, and you will see that it is almost impossible for gorillas to survive the onslaught on them and not go extinct.

Another African country that has witnessed a sharp drop in gorillas due to hunting in recent times is Gabon. Between 1983 and 2000, the country saw a 56% reduction in the population of gorillas. This is a severe decline, given that it happened within a generation of gorillas.

This is another way through which the actions and inactions of humans make them gorilla predators. The areas where these gorillas are highly populated are faced with constant and unending political instability and militancy. Parts of the Virungas where you will find a large population of eastern lowland gorillas have been occupied by militants and armed rebels.

To finance their mission, these militants and rebels have taken up mining operations (remember coltan) in the forest, extracting the natural resources found in the region. This activity has increased the population of miners and in the forests, and these miners employ professional hunters to help them source food. It is believed that the eastern lowland gorilla is one of the animals that is affected by these hunting activities.

While most of these refugees do not hunt with guns as professional hunters do, they use snares to injure or kill gorillas eventually. Lastly, due to the presence of rebel militants and refugees in these areas, conservation efforts by local and international bodies have been rendered useless.

While all of these dangers lurk around the gorilla, gorillas have a way of defending themselves in the wild. The defence mechanisms employed by gorillas defer, depending on their location, the type of predator and species. The mountain gorilla employed the following mechanism in protecting themselves against predators.

When a gorilla detects a predator nearby, he emits alarm calls (vocalizations) that warn his family about the approaching danger so they can gather, preferably close to the “silverback” leader. He has the responsibility of defending his troop from any predators, including humans.

Females tend to build strong ties with males, so they protect them.

If the intruder does not go, the silverback confronts him and makes a menacing display that usually involves, standing on his two legs and beating his chest with both hands and utter loud screams and roars with the intention to look larger and stronger.

Young males can lead others away from the predator or attack him all at once. Most of the time, predators prefer not confronting a powerful gorilla that can seriously injure them with their canine teeth and prefer to walk away.

Gorillas also protect themselves by baring their canine teeth to their predators. This is a very effective way of scaring predators away from gorillas. This is because gorillas possess such a strong canine that they can cause a painful death to whoever they bite with it, especially if the bite is deep.

Another body feature that helps gorillas protect themselves from predators is their strong hands. With their hands, gorillas can lift almost any object to attack to defend themselves. They can also crush their enemies or predators with their hands, especially if the predator is smaller in size.

Females tend to build strong ties with males so that they protect them. Also, this reduces the chances that they kill their offspring.