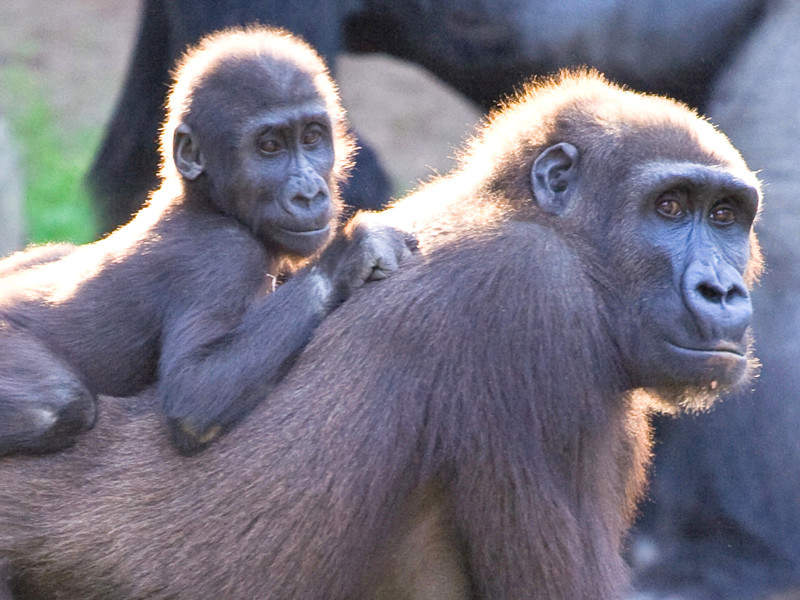 Gorillas are mammals with a reproduction behavior similar to that of other hominids. A lot of research has been done to learn about this part of their life, but most of the information currently available comes from individuals in captivity, particularly in the cases of mountain gorillas (Gorilla beringei beringei) and western lowland gorillas (Gorilla gorilla gorilla).

After researching their reproductive behavior, it has been found that all subspecies share many similarities to each other. Similar to humans, Female gorillas give birth to 1 offspring per delivery, and rarely produce twins. The estrous cycle or reproductive cycle, the recurring reproductive cycle is 28/30-33 days, depending on the subspecies.

After their first ovulatory cycle, they have to wait for a two-year period to breed an infant.

Females become sexually mature at 10-12 years old, while males at 11-13 years. Female gorillas can reach sexual maturity years earlier, even at 7-8 years old, and can have their first ovulatory cycle even during their sixth year of life, but they do not start breeding until they are ten years old or later. One of the most surprising facts is that after their first ovulatory cycle, they are unable to procreate an infant for about two years.

Gorillas are polygamous animals. By nature, male gorillas can perceive the moment when a female is in heat (available to mate), but the external signs are not as evident as in female chimpanzees, which show a swelling in the genital region easy to note.

Apparently, there is not a specific mating season so that they can mate during any time of the year. Females are in heat during 1 or 2 days a month, but before they start having sex partners they must be separated from their born troop and start searching for a “silverback” male from another group. Females are the ones who attract male gorillas with body movements: initially, slowly and leisurely they approach the “silverback” with uninterrupted eye contact while puckering their lips and then they have to assess the male response to take the next step. If the male courted do not react at her insinuation, she gets closer and can even touch him. If this still does not work, she hardly hit the ground in a final attempt to draw his attention once and for all.

Usually, only the “silverback” leader has the right to mate with the females.

In case a male perform the courtship, the purpose is the same: attract a female to mate with her, for that, he gets closer to touch her and emit sounds. In groups with several males, females may be forced to copulate with more than one, but usually, only the “silverback” leader has the right to mate with a female.

After courtship, they copulate on the ground. Until recently it was believed that only humans and bonobos mated face to face, but now is known that gorillas are also able to do it. 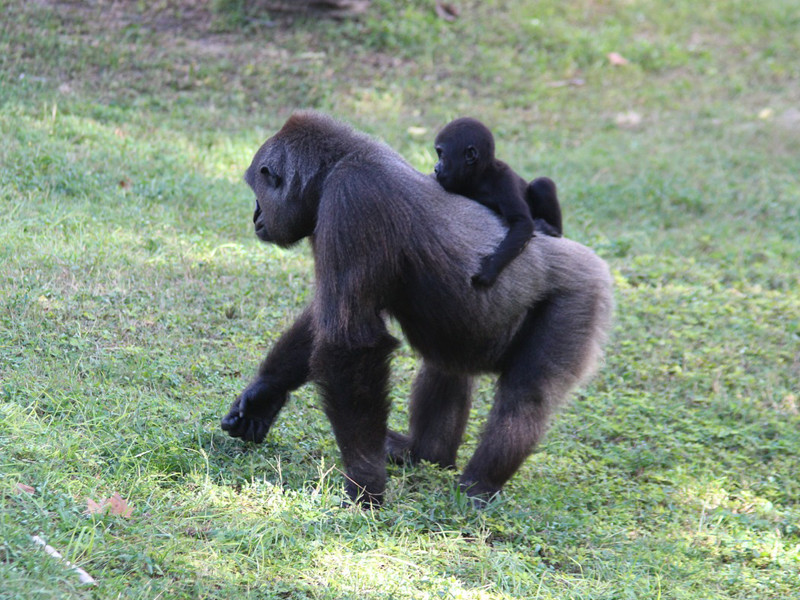 A baby gorilla riding on mum’s back.

Gorilla gestation period is about 8.5 months. Births usually occur at night, any time of the year and every four years or so. This low reproduction rate complicates the recovery of continuously decimated populations. Also, 38-40 percent of the infants die at some point during their first three years of life, during the lactation period.

Gorillas are born weighing about 2 kilos, and mostly their moms take care of them. Males usually do not participate in offspring care, although sometimes socialize with them. The mother carries her young, which firmly holds the mother’s hair up to they are 3-6 months old when the infant begins to walk. Infants weaning starts when they are three years old. As typically happens in primates, the mother-infant bond is unyielding and can last for many years.

Males do not usually participate in offspring care, although sometimes they socialize with them.

The life cycle of gorillas is similar to the human life cycle in stages, although not in times. The first stage is childhood and ranges from birth until about five months old. At three years starts the juvenile stage; they are no longer infants, but they are not adults either. At about ten years old or when they reach sexual maturity, gorillas enter the adulthood.