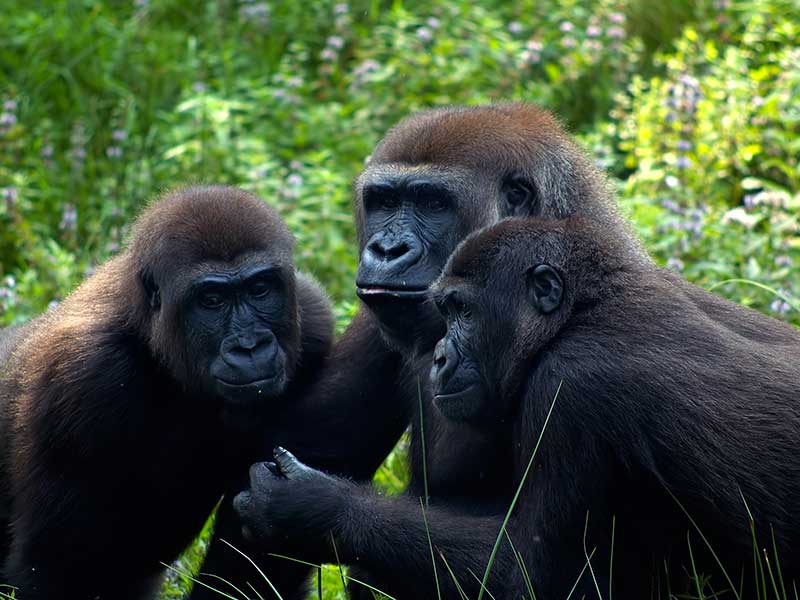 Some people think that gorillas are violent and territorial animals, but that is a myth. Quite the opposite, they are gentle and non-territorial primates, which means that they do not stop other animals entering their living area. Furthermore, since they continually travel in search of food, they cannot control one area.

Similar to other primates, they are very social animals that live in groups. Life in society helps them to survive. Males protect females and the offspring of the group, and in turn, the dominant male can access the females that are in heat.

The troops are typically composed of 2 to 30 members; from which 1 to 4 are male adults, and the rest are blackbacks, adult females, and their offspring. Groups of western lowland gorillas (Gorilla gorilla gorilla) appear to be smaller: up to 5 individuals. Their composition varies over time due to events like the death of the young and the migration of individuals when they reach sexual maturity. In average, groups have between 2 and 12 members and move around an area of 4 to 25 square kilometers.

All males get the silvery hair patch on their back when they reach adulthood, but only one of them becomes the leader.

The “Silverback” who leads a group, is easily recognized by a patch of silvery fur that covers its back. However, all males get that hair patch on their back when they reach maturity, but only one becomes the leader. It is the oldest, usually an adult over 12 years of age, and the strongest, the one that becomes the master since it has the great responsibility to protect all members of his group. Their tasks are: taking decisions, resolve conflicts, defend the group against the enemies, produce offspring, find new sites to feed, define the home area, when to eat, sleep, and so on. It also has the exclusive right to mate with females.

In some groups, another adult male can function as second in command, but always subordinated to the leader, and in particular cases, several “silverback” can cohabit and handle support. Sometimes, several single males get away from the group and decide to travel together.

Breeding females organize in a hierarchy, according to the time in which they joined the troop. Therefore, the first arriving has a higher status than newcomers, and so on.

Typically, both females and males leave the group in which they were born and join other after reaching sexual maturity. Males have to do it to avoid a conflict with the dominant leader for the females, and they must leave to avoid the dominant male to mate up with their female descendants and prevent crossbreeding. The exception occasionally occurs in mountain gorillas (Gorilla beringei beringei) groups where blackbacks can stay in their birth group even so they have a subordinate role to the dominant “silverback”.

Some males may venture to defeat the leader to become the new one.

Some mature males may try to beat the head of a group to become the new leader. If one or more unrelated females join a lone individual, a new social group that increases over time is created.

If the leader dies, the other males take the opportunity to mate with the females available and can become the next leader. But in the case of the eastern lowland gorilla groups (Gorilla beringei graueri), female gorillas can stay in the same place waiting until a new dominant male arrives and protect them.

Gorillas do not sleep in the same place two consecutive nights.

Gorillas’ daily life is quiet. Adult females are usually not related to each other, and it is common to compete to be near the leader, as this provides further protection to them and their offspring. During the morning and afternoon, they focus on their food, and they take a nap at noon. Later they resume the search for food and at the end of the day, before nightfall, they build nests in the trees or on the ground to sleep at night. Gorillas build nests in different locations, a new one every day as gorillas do not sleep in the same place two consecutive nights since they keep moving while foraging, and they do not stay at the same location for more than one day to avoid depleting their food sources.

Grooming among gorillas is important, but not as important as in other primates.