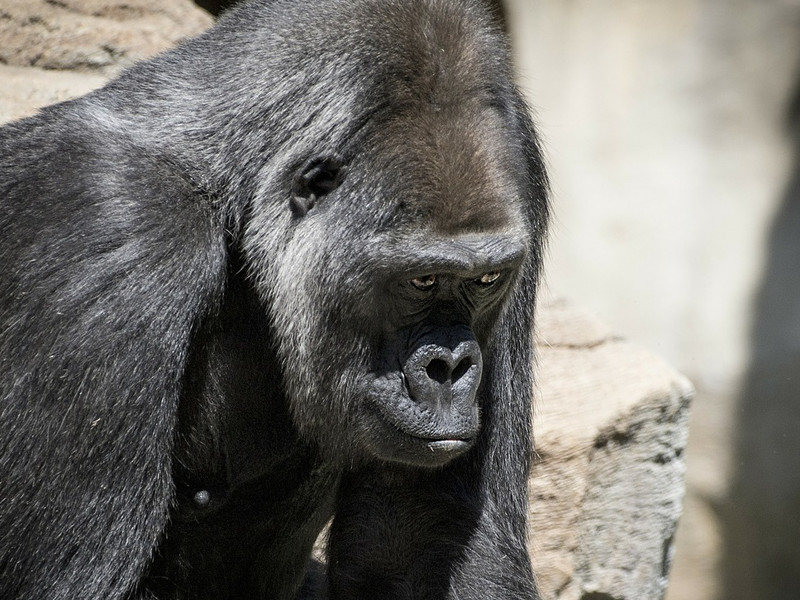 At this point, it is no surprise to anybody that many animal and plant species face a high risk of dying with higher temperatures. Earth’s biomes have a delicate balance that allows the survival of many species adapted for thousands of years to them; if a disturbance occurs, a negative or positive outcome may happen.

While species sensitive to low temperatures can increase their distribution range, it seems that global warming causes more disturbance to animals with specific food consumption or highly adapted to their habitat, like gorillas. Overall, members of the genus Gorilla are adaptable animals, who do not feed on a particular type of plants. However, some subspecies appear to be more vulnerable than others.

The mountain gorilla (Gorilla beringei beringei) is a subspecies of gorilla that inhabits mountains environments often covered by fog. Mountain gorillas have slightly longer and thicker fur than the western subspecies, as they have to deal with lower temperatures. Moreover, they do not have easy access to fresh fruit in the mountains, so they feed mostly on stems, leaves and buds of many plant species.

Higher temperatures can reduce the availability of the plants that gorillas eat.

The World Wide Fund for Nature (WWF) affirms that while mountain gorillas have some features that make them, to some extent, resistant to climate change, they also have other characteristics that make them vulnerable to increasing temperatures. They are not related to their biological adaptations, but with problems faced by many animals and linked to human activities: reduced distribution areas, low reproductive rate, invasion of habitat by human populations, low genetic diversity and a population lower than 1,000 individuals.

There are some essential factors to understand how global warming and climate change disrupt gorillas.

High temperatures can damage the vegetation available in a region, the primary food for gorillas. It is possible that some plants stop growing in some areas, or they start growing at higher altitudes where gorillas cannot reach them. Consequently, food sources are less, with the effects that this entails.

Consequently, gorillas would need to change their habits. A study led by anthropologist Amanda Korstjens, of the University of Bournemouth, UK, indicates that at higher temperatures, the leaves contain more fiber and less digestible proteins, so these primates would have to increase the time they spend feeding and digesting their food. Then, they would need to employ more time out of the sun, resting to avoid body overheating reducing the time used for social, reproductive and grooming activities.

Although all these are unfavorable arguments, they are not a death sentence. Many animals have to adapt repeatedly to constant changes in their environment, and mountain gorillas, which have a broad range of plant species to eat, should not be the exception. Perhaps the biggest problem is the humans’ settlements, which surround all the area where mountain gorillas inhabit, limiting their chance to find new types of plants. Where would they go to find more food if people already occupy everything around them?

Over time, gorillas have moved and traveled to new areas with abundant food and trees. They have a high capacity to adapt, but this does not mean that global warming is not disturbing them.