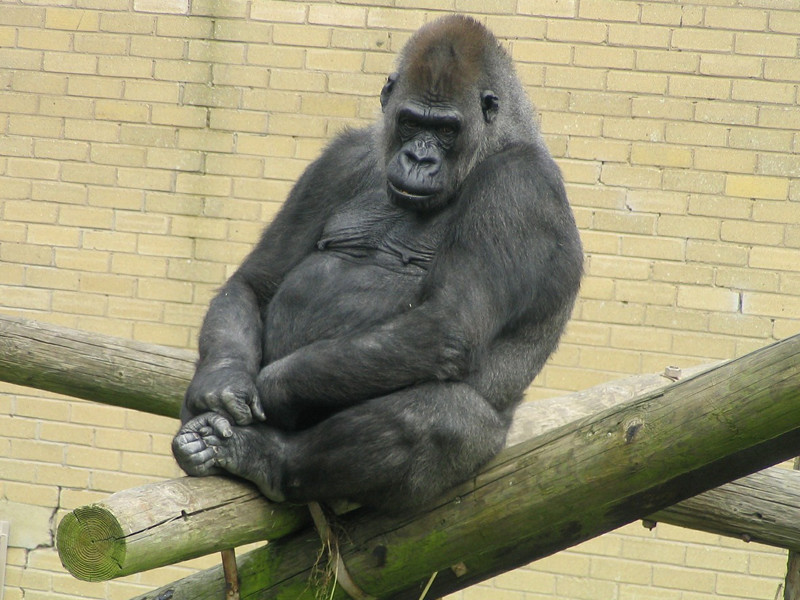 Great apes are object of continuous research either in their natural habitat and in captivity because their genetic and anatomical similarity to humans. However there are many reasons to keep gorillas in captivity: to be the subject of scientific research, to entertain people, to safeguard their lives, among others.

Fortunately the history of gorillas in captivity is not so long, since these primates were barely known before the eighteenth century. There is no record on the first gorilla that growth preserved by humans, but there are records of a Gorilla exhibited in 1855 outside Africa that was presented as a chimpanzee. In North America, the first gorilla was an infant taken to Boston, United States, but died in 1857 after only 5 days in the city.

The Bronx Zoo was the first to exhibit a gorilla, in the early twentieth century.

The Bronx Zoo was the first to exhibit a gorilla, in the early twentieth century. Over time, more zoos around the world had their own gorillas at the same time that they were included into more movies, series and cartoons, therefore their popularity increased and people were more interested in them. Today, several reputable zoos have not one but several gorillas, and have even implemented programs for captive breeding.

Captive breeding, according to the World Wide Fund for Nature (WWF), is a process to breed animals in a restricted area and under controlled conditions by humans. Some people do this for commercial purposes (to sell their offspring and thus profit), bur some others do it for research and to increase the number of individuals of an endangered species. WWF considers this as the last alternative to preserve a species, and actually is currently done with Western lowland gorillas.

A small amount of gorillas is kept as pets by individuals or as part of private collections. However, these gorillas are often captured by poachers, and sold to people unprepared to take proper care of them, which is one of the threats that this species face. Gorilla babies are curious by nature and often provoke sympathy, but when adults, their needs and maintenance increase. It is not easy to meet their demands for food, space, reproduction, etc., just remember that they are the largest primates in the world!

Furthermore, some laboratories or research centers have used gorillas in specific experiments, although its use is not as widespread as monkeys or chimpanzees. Invasive experiments, which could make them suffer, are forbidden in some countries, but some allow research on behavior and cognition of gorillas. One of the most renowned addressed the capabilities of Koko, a western lowland gorilla that Francine Patterson began researching in the 1970s as part of her doctorate in the United States. As result, Koko learned a form of American Sign Language.

Effects of a life in captivity.

Gorillas are endangered. According to the World Association of Zoos and Aquariums (WAZA), zoos are great places to show people about the natural world and the need for conservation is. It is also affirmed that most species live longer in captivity, since they do not lack food and do not have to face predators. But as you can guess, not everyone is agree with these arguments.

Many captive gorillas are obese because they consume more food and do less exercise.

The life of a gorilla in controlled facilities is not ideal, of course, because they are not pets. Many captive gorillas, including Koko, are obese because they can consume more food. Some subspecies have adapted to other kind of food in captivity. It is believed that mountain gorillas, cannot be successfully maintained in captivity because their specific feeding, based almost exclusively on foliage. Attempts in recent years have ended in sick or dead gorillas. 41 percent of deaths of captive gorillas are the result of a heart disease.

Additionally there are several ethical dilemmas. The great apes are very intelligent creatures with characteristics similar to people. The Great Ape Project (GAP) is an international organization that defends the legal rights of chimpanzees, bonobos, orangutans and gorillas. Those involved in the project argue that these primates are individuals who have highly developed social, emotional and cognitive abilities, and should have three basic privileges: the right to life, the protection of their freedom and the prohibition to torture them.

Actually, no animal should be tortured or abused under any circumstances. Keeping gorillas in captivity is an issue that still engenders negative and positive comments, but continuous conservation efforts pretend to achieve that all gorillas will live in freedom in the future.