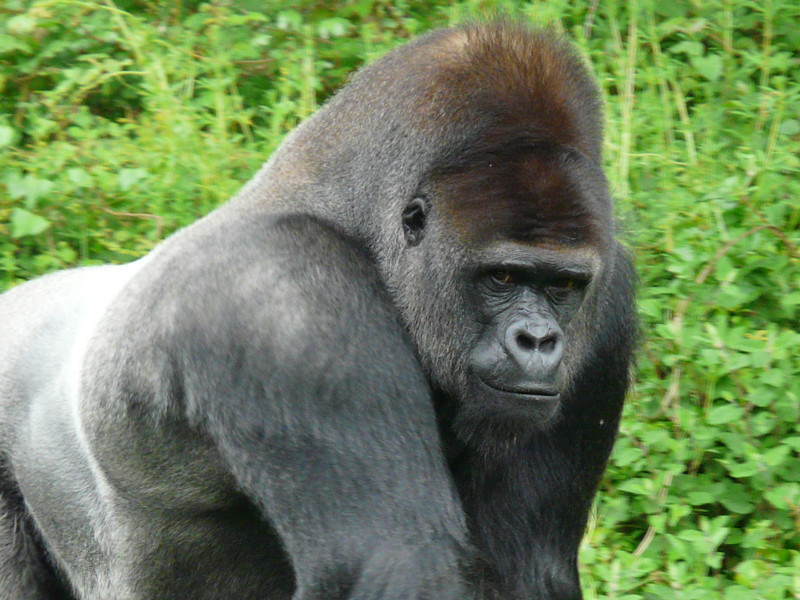 This species has large, burly individuals. The average male height is 1.55 meters, and females are on average 1.35 meters. Their weight is 80 kilos in females and 157 kg in males, estimation based on captive individuals. Their muzzle is short, with strong muscles in the jaw area.

Dark fur covers most of their body. Individuals of the species Gorilla gorilla show a clearer tone than their eastern relatives, who can show brown or even slightly reddish coats.

A few years ago, the western gorilla distribution was almost in an uninterrupted territory. Still, there are small and isolated populations at present, and they have become extinct in the Democratic Republic of Congo. This species still resides in Nigeria, Equatorial Guinea, Angola, Cameroon, Central African Republic, Congo, and Gabon.

Every day these gorillas travel between 1 and 4 kilometers to find fruit trees.

Gorillas are mainly herbivores. Western gorillas feed on leaves, buds, and especially fruit. The availability of these varies throughout the year, so their consumption may also change. They eat large quantities of fruits of the genus Dialium, Tetrapleura, Chrysophyllum, and Landolphia. Occasionally they catch ants, termites, worms, grubs, and caterpillars.

When the fruit is scarce, they are forced to eat leaves, woody vegetation, bark and low-quality herbs, such as those that belong to the genders Aframomum and palisota.

The western gorilla lives in groups of 2-20 individuals, with a leader, is a “silverback” male with the responsibility to defend the females in the group and their offspring. Both genders leave their born troop at adulthood and move to other groups to avoid crossbreeding and leadership confrontations.

Their life is peaceful, with few aggressive incidents. In the case of danger, the silverback male makes a threatening display for intimidating the intruder; therefore, he stands on two legs, makes loud vocalizations and beats his chest with both hands.

In cases of danger, the silverback male makes loud vocalizations and beats his chest with both hands.

Group members communicate through alarm calls, facial gestures, movements, postures, and touching. They are diurnal and relatively passive because they do not perform migrations, although they travel together for months and years searching for food. Therefore, they are not territorial.

It is a polygamous species, like all gorillas. Females can start having offspring when they are 8 or 9 years old, although the average sexual maturity age is ten years.

The dominant male or leader is the only one that can mate with the females of their group, and this can happen during any time of the year since there is no specific breeding season. The gestation period is about 8.5 months, and usually, only one infant is born, weighing roughly 2 kg.

Mothers nurse their young for 3 or 4 years, and they transport and take care of them. The males hardly interact with the infants. Many babies die; if the female delivers twins, she allows one to die because it is hard to take care of and transport both.

Their life expectancy in the wild is up to 40 years.

They are victims of poaching, diseases and habitat loss.

This species appears in the Red List of the International Union for Conservation of Nature as a “Critically Endangered Species.” Regardless of this, it is a species victim of poaching, infectious diseases and habitat loss. The low birth rates of the species worsen the problem, as the number of individuals does not increase quickly enough.

Below is a detailed explanation of the threats facing the western gorilla;

Because of the increase in the rate of interaction between humans and gorillas, the chances of transmitting these diseases become very high. Some of the diseases that affect western gorillas include measles, Ebola Virus, meningitis, tuberculosis and many more. The last outbreak of the Ebola Virus in some African countries claimed the lives of about 75% of the infected gorillas.

Western gorillas lose their natural habitat through fragmentation. Fragmentation, one of the numerous means of habitat loss to western gorillas, occurs when parts of the forest are cleared for agricultural and pastoral purposes. When this happens, pockets of forests remain, which are not large enough for these gorillas to survive, live or thrive.

Apart from farms and other agricultural uses, settlements, roads and other human establishments are built to facilitate the movement of humans in and around the clear area, thus separating these forest fragments. These boundaries give rise to subpopulations of gorillas, which in turn increases inbreeding and prevents effective gene flow.

These types of deforestation occur in forests where there is a need for expansive agricultural operations to feed a nearby human population. However, in places with low human densities and no need for expansive agricultural activities, western gorillas still lose their natural habitats to humans. This time, the forests are subjected to logging concessions. This means that individuals and businesses can obtain licenses to fell trees in these forests.

By felling these trees, the size of the forest gets reduced, and it becomes more difficult for eastern lowland gorillas to feed and live properly.

To finance their mission, militants and rebels have taken up mining operations in the forest, extracting the natural resources found in the region. This activity has increased miners’ and in the forests, and these miners employ professional hunters to help them source food. It is believed that the eastern lowland gorilla is one of the animals affected by these hunting activities.

While most of these refugees do not hunt with guns as professional hunters do, they use snares to injure or kill gorillas eventually. Lastly, due to rebel militants and refugees in these areas, conservation efforts by local and international bodies have been rendered useless.

Hunting for bushmeat is another serious issue facing the survival of the Western gorillas in their natural habitats. The communities surrounding the forests and habitats inhabited by these gorillas are populated by traditional African societies, where animal hunting is one of the acceptable jobs and professions. There is a value chain or industry-like structure created around the hunting of animals. This value chain consists of the hunters that kill the animals, traders that sell the meat, and professionals that remove these animals’ skin for artistic, fashion or decorative purposes. Given this type of structure, it is clear that animals in the forests are not safe, and the western gorilla is one of the animals at the receiving end.

Gorilla hunting is prohibited internationally. The Convention on International Trade in Endangered Species (CITES) includes this species in Appendix I, considering them in great danger of extinction. Apart from these efforts, there are other efforts made by national governments and international organizations that focus on creating and expanding protected areas and monitoring the existing sites where these gorillas live to reduce the impact of poaching, habitat loss, and war. Some of these efforts include;

Enacting laws and regulations that would prohibit the hunting and capturing of gorillas for illegal trade or pets is one of the best conservation efforts taken in recent times. These legislations did not come from local and national governments alone; international bodies also made laws that help protect these endangered species of gorillas.

Some examples of the national laws and legislation that prohibit the killing and capturing gorillas include The Nature Conservation Act Ordinance-Law 69.041 of 1969. This law defines national parks.

Another important law that helps the conservation cause is the Law 82.002 of 1982. This law defines game reserves and lists out the species of animals prohibited from hunting and capturing, of which the Western Gorilla is part.

International laws and legislations that assist the conservation effort on eastern lowland gorillas include the COMIFAC Treaty of 2005, The Kinshasa Declaration on Great Apes of 2005, and the CMS Gorilla Agreement of 2008.

Efforts are being made to ensure that the world pays adequate attention to the parks and game reserves where the western gorillas are. One of the progress made on this front is the inclusion of the five parks and reserves holding these gorillas on World Heritage Sites in Danger. This will ensure that the relevant world bodies pay enough attention to the sustenance and maintenance of the parks.

However, the problem is that the conservation laws in some of the African countries where they live are not enforced as they should

Gorilla males are ready to mate when they are approximately 13 years of age. For females it is about 10 years of age. Gorilla mating happens all year round.