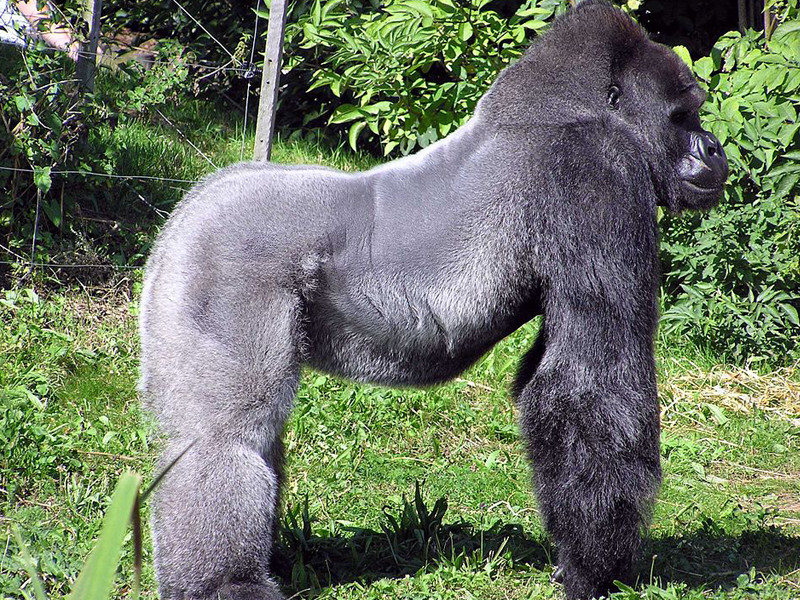 The western lowland gorilla is the subspecies of the western gorilla with the largest number of individuals, the most popular and usually the one found in parks and zoos. It is also the most researched subspecies, so there is plenty of confirmed information about their biological characteristics.

Although they seem huge to us, the western lowland gorilla is the smallest subspecies, even more than the mountain gorilla. An adult male height is between 1.5 and 1.8 meters, and their weight ranges 140-270 kilograms. Females are smaller and lighter than males. However, captive males can weigh more than 270 kilos because the sedentary life they have.

The body of both genders is robust and powerful. The head is relatively large with a broad skull and a very noticeable brow ridge, a kind of bone crest. They have powerful muscles in the jaw that help them rip and chew tough, fibrous plants with the help of his 32 teeth. They do not have a tail, and they have opposable thumbs; this means that they can take objects using the thumb and the other fingers, as humans do.

Their skin, except the face, hands, feet, and ears, is covered with a layer of black or grayish-brown fur. When males reach sexual maturity, they acquire a silvery-gray patch of hair on their back and the upper thighs. They walk on their knuckles, but they can stand for moments and even walk only on both legs for a few meters.

Is the subspecies of the western gorilla with the largest number of individuals and usually the one found in parks and zoos.

The western lowland gorilla (Gorilla gorilla gorilla) is native to Cameroon, Angola, Central African Republic, Gabon, Congo and Equatorial Guinea, and is considered extinct in the Democratic Republic of Congo. Its habitat includes the eastern part of Africa just to the west of the Congo Basin.

They inhabit lowland tropical forests, although some populations live in swampy forests, riparian forests and forest edges where the environment is humid and rainy, full of vegetation. The groups dwell in territory ranges of up to 20 square kilometers.

The lowland gorilla is a herbivorous animal. Their diet consists of fruits, roots, leaves, stems, bark and wood pulp. The amount of fruits included in their diet depends on the season, so their consumption increases during fruit season, as they prefer them to leaves. They can eat more than 100 species of plants and adults eat about 18 kilograms of food per day, the amount needed to maintain a body with that dimensions.

This subspecies has similar behavior and lifestyle of the others. They live in family groups dominated by a single male, the “silverback”, whose responsibilities include protect everyone in the troop, take decisions for the group and breed with all available females. In exceptional cases there are two dominant males; when this happens, it is almost certain that it is a father and a son.

Gorillas have a reputation of fierce and aggressive animals, but most of the time they are calm and peaceful and prefer to avoid confrontations. The dominant male threaten intruders or attackers only when he has no option; this usually includes a demonstration of power in which he stands only on his legs to look bigger, beating his chests with both hands and emitting powerful roars. If the intruders choose to attack him, then he will engage in a fight.

All subspecies of gorillas do not reproduce prolifically. A female reaches sexual maturity at 8 or 9 years old and can have offspring every 4-6 years, but some of them do not reach sexual maturity until they are 10-12 years old. Despite being fertile throughout the year with no specific mating season, females have the chance of becoming pregnant only for 1 or 2 days a month, which results in a reduced birth rate for the subspecies. Meanwhile, males reach sexual maturity later than females.

The western lowland gorilla is polygamous: the dominant male mates with all the available females in the troop. The gestation period lasts about 8.5 months and sometimes almost 9, and usually, a single infant weighing about 2 kg is born, after a smooth delivery that lasts approximately half an hour. The newborn stays with his mother all the time during the initial months, who breastfeeds and carries him on her back or belly when traveling. As the infant grows it risks moving by itself, but always under the vigilant eyes of his mother and the protection of the “silverback”.

Both females and males usually leave their birth group when they reach sexual maturity. Females do it to avoid conflicts with others when trying to get favors from the leader, and males to prevent confrontations with the dominant male, which at certain age considers them a threat to his position. Consequently, mature individuals move away in search of a new group.

The red list of The IUCN classify the western lowland gorilla as a critically endangered subspecies (CR).

The red list of The International Union for Conservation of Nature classify the western lowland gorilla (Gorilla gorilla gorilla) as a critically endangered subspecies (CR), a status reached because two causes mainly: poaching and the Ebola virus disease, which also takes a toll from gorillas. Additionally, excessive logging has degraded and reduced their habitat as thousands of hectares of forests, which are their home, keep disappearing.

Conservation laws prohibit the hunting and capturing of western lowland gorillas, but the enforcement of these laws is difficult in the places where they live. Many gorillas live in national parks and protected areas, but many others dwell in unsafe places.

Attempts are being made to promote the sustainable development of their habitat, trying that the impact of human activities such as agriculture, farming, and many others have a minimal effect on them, and the number of individuals in the wild can increase again with time.